Writing, a Party, GE, and Samsung

Writer’s block is something that’s been ascribed to by writers for years. You know the definition. The ideas aren’t there, the well has gone dry, the muse has left the building, the empty page holds you in a mind-altering stare. I’ve never been much of a fan of the idea. My philosophy has always been to show up at the computer or the notebook, sit down, tie myself in the chair if necessary, go to work, some days more brilliantly than others. Usually, my self-discipline is pretty good.

However, the past two weeks I experienced a writing problem of a different variety. Not really a block. More of a barricade. Well, not really a barricade. More like life being capricious and messing with me.

A Party and Writing

First, I was planning a birthday party for my husband. It was a significant age achievement. Time to bring on the caterers, name tags, guest lists, music. I admit it. My self-discipline gave in to the fun and excitement of a party. When I did sit down to write, my eyes looked at the computer screen, I thought for a moment on the current short story called “The Simian Society,” I tapped a few keys, and then my mind happily tripped off to party land. For example, maybe I should have balloon towers in the colors of my husband’s universities. Balloony Tunes, a local balloon company, to the rescue. Then I went on to logistics. Will there be enough chairs? Will there be enough food?

You have the idea. Which was more fun? Working through a sticky story issue or thinking about a party. Final score? Party – 1. Story – 0. I would have been in real trouble had I had a story deadline.

And then the party arrived. And then it was over. Post traumatic party disorder set in. I felt like the balloons in these pictures. Towers of balloons flying high one minute, saying “Hey, look at me!” and then, slowly, poooooof. Nada. 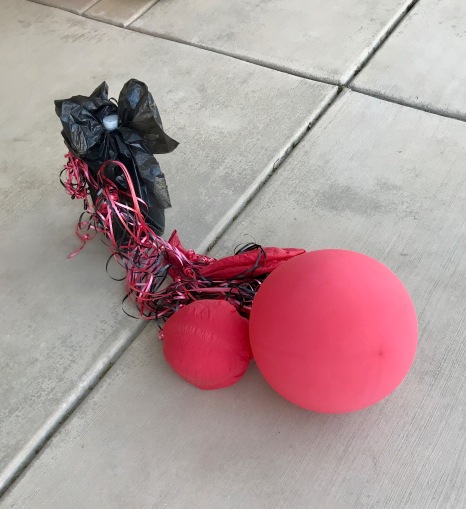 So I sat down to write and I did. Not only was writing a great way to bring myself out of the after-party funk, but “The Simian Society” looked fresh and welcoming, and the words were there. Write on, my friend, and I did. Then one night before dinner ….

I had two servings of basmati rice from Trader Joe’s to reheat. Into the microwave it went. Poof! When I pushed the tabs, nothing happened. Wait a minute. The micro is only 15 months old. I grabbed the manual and went to the troubleshooting page. Words of wisdom from a microwave manual: Unplug the micro and plug it back in. I did. More words of wisdom: Check the circuit breakers. I did. Then I pushed the tabs. Dead as an old party balloon. (See pix above.)

In the meantime, the main TV, the big smart one, the one everybody watches as opposed to the TV sets in the bedrooms, had begun to ail but not morbidly so. Over a period of about a week the TV developed a hitch in its git-a-long. At first, it took several clicks of the remote’s on/off button, then it progressed to numerous clicks to turn the TV on.  Finally one night after infinite clicks, the smart one wouldn’t come on at all. With three visits from Spectrum, our cable company, and three changes to the the cable box, the diagnosis came in about the same time as the microwave’s decision not to work. The smart TV? DOA. What about repair? Ah, my dear, probably cheaper and more efficient to buy new.

Well, since we couldn’t watch TV on the big one, I decided to tend to house business. Into the utility room I went and clicked on the overhead fluorescent light to do the wash. A phfffft. A gasp. No lights. Burned out. Now, I must confess, I enjoy romantic lighting, but not to do the wash. Problem – no extra fluorescent tubes on hand.

You have the idea. Life’s tricks. We all experience them. Writer’s vision fogged by daily living. Story ideas and writing time become the victims of mind fog: shop for a new micro or repair it. Shop for a new TV or repair it. Go to Ace Hardware for lights. Get out the ladder and put the damn fluorescent tubes in. Well, I’ve done all I can. The verdicts will soon be known. The doctors are arriving – GE Repair in the morning for the micro and TV Men in the afternoon for the Samsung.

Whether it’s self-discipline or life’s fog, life can play games. Well, life, you can get in the way all you want, but I’ll still write, somedays, as I said before, more brilliantly than others.

Here’s another conundrum. I placed second in the Palm Springs Writers Guild Personal Essay Contest. The check was intended for a personal reward. Shall I put it toward a microwave? A TV? A trip to Chico’s? I’ll have to decide, but I think it’s a no-brainer.

No doubt. Life and Writing are an odyssey.

6 Responses to Writing, a Party, GE, and Samsung