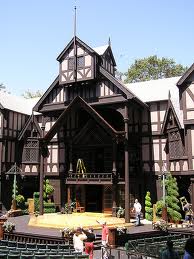 The small city of Ashland, Oregon, located just north of the California/Oregon border near Interstate 5, is known for its Shakespeare Festival. I haven’t been there for a few years but have great memories of the place. My parents lived in Ashland in the hills behind Southern Oregon University. I’d visit them in the summer and, during one of my stays, I walked down the hill to work in the university library. I was studying for my Master’s Degree in theatre and attended plays almost daily. For a theatre major, Ashland was and is a feast. While at the library, I looked out on flowers, pine trees, and green mountains. Quite a change from southern California and the desert.

I enjoy most of the small city of Ashland. I haven’t quite decided on the natural springs of lithia water bubbling from the public drinking fountains in The Plaza at the center of town.

The water is best described as odd tasting, odiferous stuff.  Many people drink the mineral water and local lore celebrates its health benefits. My visits, I confess, include a hasty gulp or two – just to hedge my bets.

The Oregon Shakespeare Festival has something for everyone: classic, traditional, and experimental theatre. Whether on the boards of the outdoor Allen Elizabethan Theatre, on the proscenium stage of the Angus Bowmer Theatre, or in the experimental arena of the Thomas Theatre, the plays provide audiences with some of the finest regional theatre in the country.

One of the most stunning productions I’ve seen there is the Jacobean tragedy ‘Tis Pity She’s a Whore” by John Ford, first published in 1633.  Each scene formed a tableau. The acting was stellar.

During one of my first trips to Ashland, I discovered Bloomsbury Books on E. Main Street. The bookstore bears the name inspired by the Bloomsbury group – intellectuals, writers and artists who gathered in Bloomsbury, England, in the late 19th and early 20th centuries. These colleagues, surrounded by family, lovers and friends, met to discuss their work, their ideas. E.M. Forster and Virginia Woolf were among the participants.

Printed on one of the store’s bookmarks is a quote by Virginia Woolf: “I have sometimes dreamt that when the Day of Judgment dawns – the Almighty will turn to Peter and will say when he sees us coming with our books under our arms, ‘Look, these need no reward. We have nothing to give them. They have loved reading.'”

The store, nestled in a narrow portion of an historic building on Ashland’s main street, bears no trappings of chain booksellers or corporate promotions. Instead, hand-printed 3×5 cards thumbtacked to the shelves highlight the notables or “Good Reads.”

Open daily, the shop lured me to its door on each of my arrivals in Ashland. In the literature section, I lingered over the notables and checked my wish list. Oregon is a great place to stock up on books. No sales tax. From there I wandered to the art and photography section. Next to the theatre section for scripts of current Ashland productions, books on acting, make-up, set design, lighting. Then into the poetry section. I would add a current magazine on writing, the local Ashland Daily Tidings newspaper, and several birthday cards from the card racks. I was ready, arms loaded, to check out.

With books bagged and wallet lighter, I wandered upstairs to The Coffee House. My goal was a comfortable couch by the fireplace or an orphaned café table with mismatched chairs where I could enjoy a tall latte, decaf, nonfat. (I know, I know. My drink of choice is often called “A Why Bother” or “A Waste of Time.) I dug into my bag of books and indulged a reader’s lust – the launch of a new read while drinking a latte and noshing on a large chocolate chip cookie. (Vacation meant no diet police.)

Orlando the Cat, now gone to cat heaven, once lived in the store. He was an immense, long-haired gray feline. He looked like he should be called Smoky or maybe Chester, but his name was Orlando. A nonchalant charmer, showing the disdain common to the species, he lounged among the contents of Bloomsbury Books. The owner rescued him from the pound. I wondered at the source of his auspicious name.

Perhaps it was for Orlando Coolidge, an 1862 Ashland pioneer, who prospered as a commercial nurseryman. His restored Victorian home became a bed and breakfast. The Coolidge House, located on Main Street, commands a view of the town.

Maybe he was named after Orlando of Shakespeare’s As You Like It. That Orlando liked to slip into the forest to look for his true love Rosalind. The play has a noble and happy ending. I suspect Orlando the cat was noble and happy, too. He didn’t harass the clientele and I didn’t see any mice.

A book by Virginia Woolf bears the same name. Her Orlando lived a varied and colorful life, which covered several hundred years. Orlando the cat possessed nine lives and lived a rather extraordinary life among bulging bookshelves, piles of newspapers, and the busy feet of book-seeking humans. 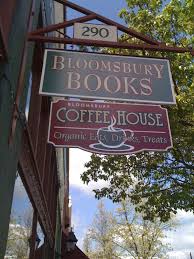 Orlando used to recline in the narrow aisles or by the front door, oblivious to traffic flow, unperturbed, adding instant atmosphere and panache to what became my favorite bookstore. A sign hung on the door offering a gentle reminder – Don’t Let the Cat Out. I don’t know if the owners have replaced Orlando.

A quick aside. My parents chose Ashland for their retirement and are now at rest in Scenic Hills Cemetery on the outskirts of the city. On one visit, my sister and I took my then 87 year old father to see an uncut production of Hamlet at the Angus Bowmer Theatre. We smugly joked he would fall asleep during the evening production. Earlier in the day, my sister and I went antiquing and toured a few wineries. Guess who fought sleep that evening? Yep, my sister and I. At one point I looked at my father and his lips were moving as he silently recited the lines along with the actors on stage. He didn’t miss a beat.

If you’ve been to Ashland, would love to know your thoughts. If you go to the Oregon Shakespeare Festival, I suggest stopping at Bloomsbury Books. I also suggest a sip or two of Lithia Water, done quickly.