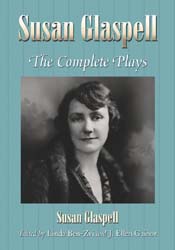 Like a short story, a one-act play takes you into the intricacies of the human condition quickly.
Trifles by Susan Glaspell is one of these plays and is based on an event she covered while working as a reporter.
*
The story. At a desolate farmhouse, a local farmer has died. Authorities suspect foul play and detain the victim’s wife in jail. The sheriff and the County Attorney come to the farmer’s house to investigate. With them are the sheriff’s wife and another woman and her husband. While the men look around, the two women gather belongings to take to the jailed woman. They make an important discovery ….
*
As the tension builds, we learn of the dead man and his wife, about trifles, the women, and the significance of a birdcage.
*
When I read a play, I draw a quick airplane view of the stage on a separate sheet of paper, either as it is described by the playwright in the opening text or as rendered and printed at the beginning of the script. I keep it beside me as I read. It helps me “see” the action as it unfolds in the italicized stage directions.
* 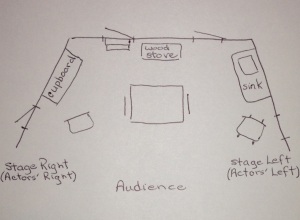 Stage layout (from the script)

If you haven’t read the play, here’s the link – Just scroll down to the play text. http://itech.fgcu.edu/faculty/wohlpart/alra/glaspell.htm

Do you have a favorite one-act or full-length play? A favorite playwright?

For more on Susan Glaspell (1876-1948), an early feminist and Pulitzer prize-winning playwright  – http://blogs.shu.edu/glaspellsociety/sample-page/ 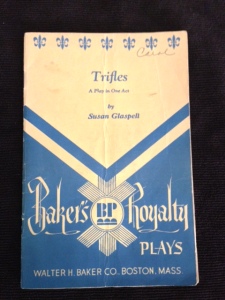 An aside – I played the sheriff’s wife in a production of Trifles during a three day Festival of One-Act Plays. At the crucial moment, when the two women make their discovery, the other actress and I had a moment of panic. We thought the prop people had forgotten to put the “important item” where it was supposed to be. It was there, but placed differently than in rehearsals. We wondered if the director had this done to heighten our reaction. We asked him afterward. “Yep,” he said. Thanks, cowboy. (The production won First Place – Drama.)

2 Responses to The One-Act Play