A Cup of Creativity Tea

I read the e-mailed invitation twice. “Come to Tea and Tangle.” I’ve been to many teas – High Teas, Christmas Teas, Membership Teas. But never a “Tea and Tangle.” I called to RSVP. The hostess told me a friend of hers had coined the catchy phrase on the invitation. She also told me I’d need a black, fine-tipped gel pen because we were going to zentangle. I told her I didn’t know what that was. She said not to worry. The women who were coming had zentangled before. I’d have lots of help. Reassured, I bought some gel pens at our local Office Max. 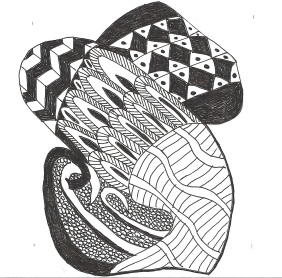 I arrived to find the ladies chatting, enjoying tea, noshing on homemade goodies, and slowly assembling at two large tables. They readied their supplies of fine-tipped gel pens – some black, some in various colors – along with squares of white paper called tiles. The hostess provided me with  a pencil, a paper tile, sample patterns, and three quick directions. “Put a small dot about 1/4″ or so in from each corner. Draw a curving line called a thread on your paper tile. Then draw a pattern on a section of the tile created by the thread.” I nodded. I placed the dots. Drew the thread. Looked at the sheet of patterns.

“newbie” in the group. I dutifully began making curlicue circles that resembled long pigs’ tails. Slowly, I added a teardrop pattern. As I drew, I felt the supportive atmosphere and began to relax. I became immersed and “in flow” with my patterns. I added black and white checks. It took me a while to realize the boisterous, noise-filled room had quieted and been replaced by a serendipitous synchronicity of creative energy. I stopped to savor the moment. To listen … to myself … to the gentle sound of pens moving on paper. Content, I added small circles to my tile. I contemplated adding red into my patterns.

My mind seemed peaceful and cleansed, the clutter of worries, frustrations and stress pushed aside, as if I’d taken a deep breath of fresh air. I felt stimulated and inspired. I felt aware … open to ideas, to experimentation, to discovery. I knew I was experiencing a special moment, an empowering moment. Carefully, I placed red in the large teardrops, some of the small circles, and around the curlicues.

My Zentangle journey took place over several hours and brought me to a calmer, clearer place … in touch with others … and in touch with myself. Later that evening, I worked on a short story, renewed and  re-energized.

Curious about the Zentangle art form, I learned it was created by Rick Roberts and Maria Thomas. The patterns and combinations are limitless. One of their patterns is called “Mooka,” based on the art of Alphonse Mucha who worked in the late 1800’s and early 1900’s in the Art Nouveau style. Click on the following link and watch a “Mooka” unfold.
http://www.youtube.com/user/Zentangle 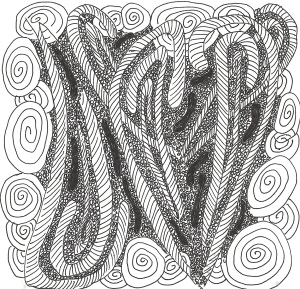 I also was curious about the word Zentangle. Do you remember sitting in a class and doodling on the notebook page while you were supposed to be taking notes? That’s the tangle part. Doodling. Repeating patterns, joining patterns. The zen is Zen, a Japanese Buddhist sect which teaches meditation and enlightenment. A morning of “Tea and Tangle” helped me rediscover what it was like to be at peace. It revitalized my belief in others. And in myself.

Thank you, Vicki, for being such a terrific hostess and facilitator. A cup of creativity tea was just what I needed.

I'm a writer ... of fiction, nonfiction, and poetry. I blog about writing, short stories, poetry, books, plays, and thoughts on life. Love reading and travel and being with friends!
View all posts by cmwriter →
This entry was posted in Creativity, Inspiration, Looking for Inspiration, Writing and tagged "Mooka", Alphonse Mucha, peace, synergy, tangle, Zen, Zentangle. Bookmark the permalink.

4 Responses to A Cup of Creativity Tea